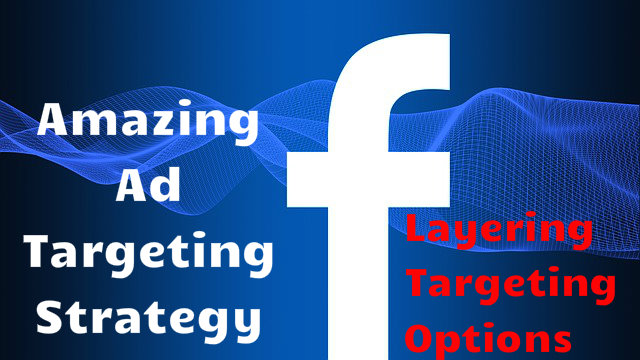 Do you want to learn how to find a very Interested, and Passionate target Audience using layering on Facebook, as well as… increasing your Facebook ads conversion rate?

Well, you’ve come to the right place for this powerful Ad Targeting Strategy!

In this post I share my notes about layering targeting options for Facebook ads. My notes are based on a video created by Wilco de Kreij.

Wilco is an online marketing expert and he has a lot of experience with Facebook advertising.

So let’s go into it a little bit deeper. It is important for me to make sure you fully understand what layering is, why you should use it, and how to actually set it up.

Well, there’re several ways to find and use interests.

Most people advertise “the normal way”. For instance, they have five different interests and in this case Facebook would target everyone who’s “inside” at least one of those interests.

Let’s say you’ve five famous people inside your industry or niche market, who you are actually trying to target. Now, if Facebook “thinks” that people are interested in just ONE of them, they’ll be included in your ad audience.

However, the low-hanging fruit, which is usually a smaller (niche) audience, would be an overlapping segment. In other words, people who have shown interest in two or even three of those (famous) people.

For example, if we focus on the online marketing market… People who are interested in at least three different famous internet marketers… Chances are high, that they are really passionate about online marketing!

Every single time Wilco tried this approach, he actually got way Higher Conversions. For your information: I can confirm this. I got higher conversions, as well as a lower cost per click using Facebook ads this way.

This is the low-hanging fruit, which will give you Higher Conversions, but the downside is obviously, and I need to mention that as well, is that you can’t scale it as easily.

In other words, the audience is usually smaller, which means that you’re going to run out of the audience faster. But it’s a good way to start, and once that works you can go out without layering as well, because both ways work.

The easiest way to show this visually is with the image below. 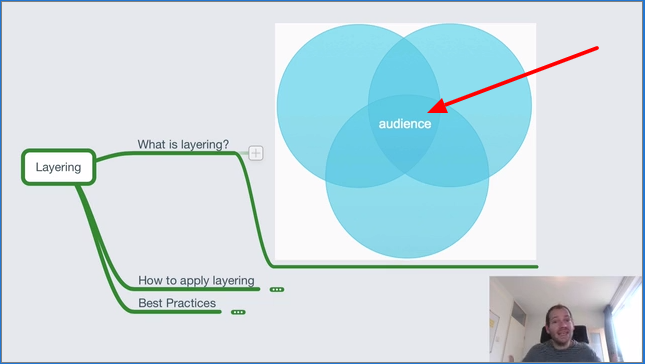 Instead of just targeting one interest you’ll be targeting, as said before, the overlapping segment of multiple interests.

Okay, how do you actually apply layering?

First of all, Wilco shows that inside the Ad manager of Facebook, as well as inside his Fb interest targeting tool Connect Explore.

Inside of the Fb ads manager, you actually add deep targeting inside the Ad Set. 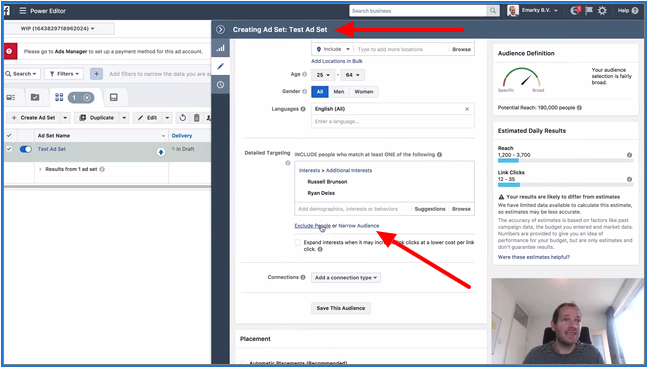 In this example the digital marketers Ryan Deiss and Russell Branson were already added as a targeting interest.

Now you choose “Narrow Audience” and you can add another interest.

For example, Neil Patel is a good web marketer. Right now you already have added one layer. You can even go deeper by adding more layers here. Let choose another respected online marketer, Frank Kern for example. 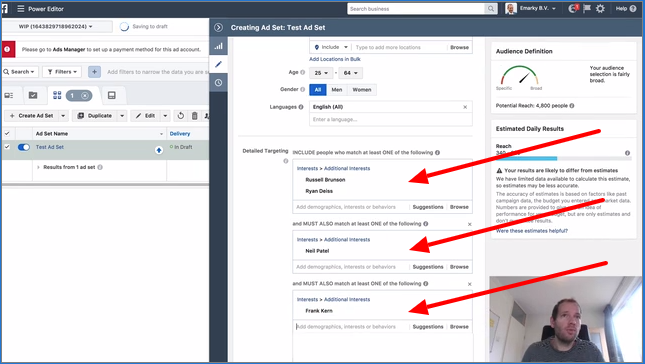 Wilco actually recommends adding a lot more interests (in this case internet marketers). You can see there’re only 4,800 people inside of his target audience and that’s not enough at all.

Normally when you’re Not using layering, Wilco recommends going for at least 500,000 people as a target audience… of course only if that’s applicable for your target niche market.

With layering, oftentimes, you’ll get a smaller audience and that’s actually fine. It shouldn’t be this small, because with 4,800 people you’re going to run out this audience in like a day or so. It definitely needs to be more than that!

How do you do this?

Basically, how do you get more interests to target with layering instead of just a couple like this and doing it manually?

Well, that’s one of the reasons why Wilco and I use ConnectExplore 🙂 !

Click Here, if you want to know more about ConnectExplore.

Wilco shows an example of a niche he’s not familiar with: the golf niche.

He uses ConnectExplore to search for golf-related-interests. He enters “golf” as a keyword. 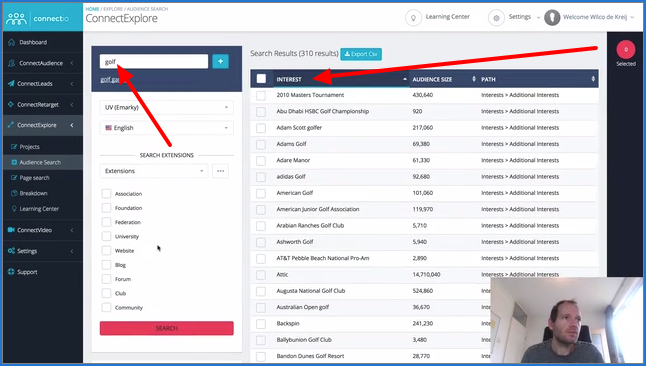 Obviously, you don’t want to have anything to deal with Volkswagen, because that is a completely different kind of Golf :-). Gulf, isn’t related to golf as well. He just applies these as a filter.

Clearly, you want to make sure that all the ConnectExplore interests are related to golf (sport). As the Masters Tournament is, for sure. And Adam Scott.

You need to make sure that the selected interests match your niche market.

Maybe you don’t want to go for the Junior Golf Association if you’re not going to target junior golfers.

He researches Adare Mayor using the Google search engine. This looks like a luxury hotel, and they have a golf club. So this could be related.

As you can see, Wilco just goes through all the interests, which finally ends up in a bit of beta interests list for facebook ads.

Now, for demonstration purposes, he’s just going to select all the Facebook interests in ConnectExplore, because he wants to show you something…

Let’s say you want to add all those interests to an Ad Set.

What you’re going to do: hit the Apply-to-Ad-Set button. Right now these are all in one layer. 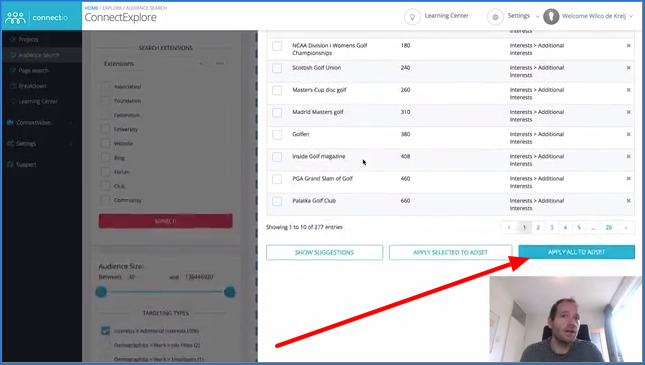 Now Wilco would add another layer or maybe even two. Just click the button Add-Layer in ConnectExplore twice. 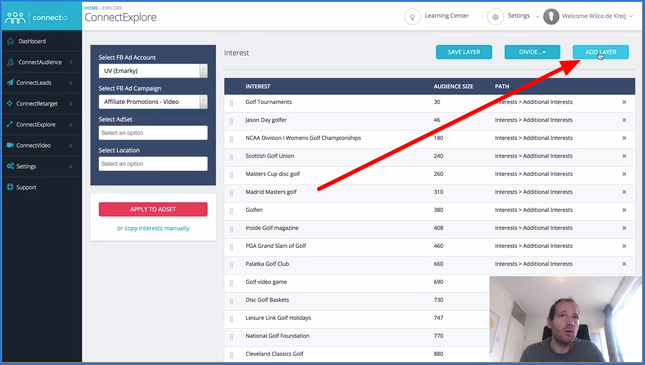 As a result there are two empty layers added.

You can actually Divide all the interests “Randomly” (using a button). You can also do it on “Audience size” or on “Targeting type”, because some customers requested this feature. 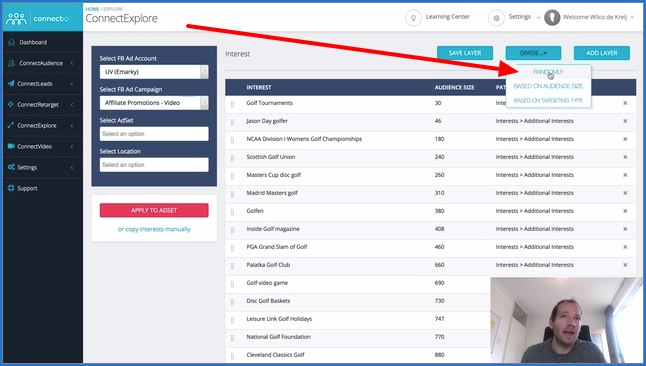 Wilco always uses “Divide Randomly”. That just makes sure that completely random one-third of all the interests are going into the first layer, 1/3 is going into the second layer and another 1/3 into the third layer.

After that he selects his Facebook Ads account, and the Test Ads that he used above. Then he hits the button Apply-to-Ad-Set…

He refreshes the actual Ad Set in the Facebook Power Editor, just to show you what happened… 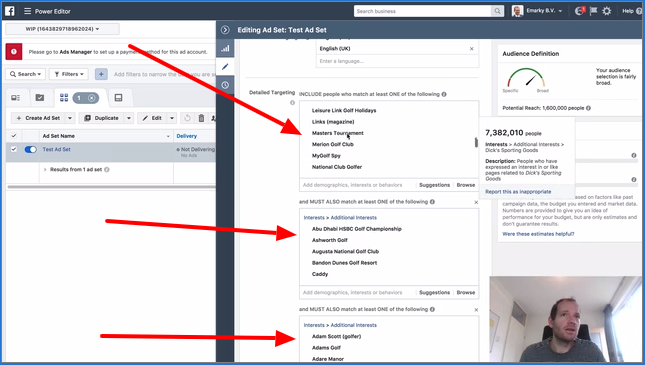 Now this Ad Set has a potential reach of 1.6 million people. So that’s actually, a good decent size.

Once again, Wilco has just added All of the interests for demonstration purposes. You need to make sure that all of them are actually relevant to your niche audience. That way you will definitely get a smaller number than the 1.6 million. 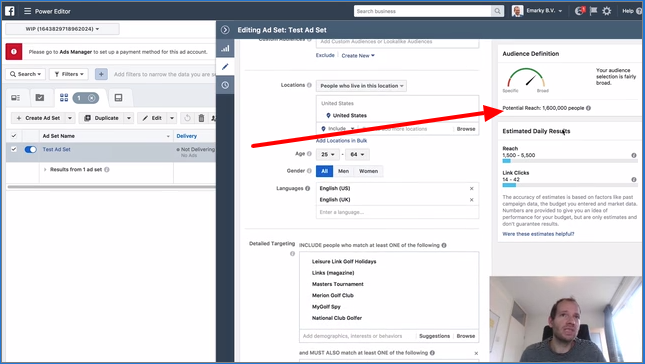 That’s totally fine. At least, you know that everyone is going to be more interested, more passionate about your (niche) market.

Now, you know how to actually apply the layering using ConnectExplore. This way you make sure you are targeting the overlapping segments of multiple interests.

So let’s talk about best practices.

What has Wilco learned from all the Facebook ad campaigns he ran?

Well, basically, two methods have worked very well for him. The two layering methods that he has been using for Fb ads are:

The first one is Just like he showed before when he was targeting people in the online marketing space, like Ryan Deiss, Russell Brunson, and others, which he divided over multiple layers.

Those interests are all similar. They’re all related to the exact same industry / market. By using layering you just make sure, that the targeted people are interested in at least two or three of the selected interests.

This method is the main one he’s personally using, because it’s just easier to dive deeper into a certain (niche) market, especially when using ConnectExplore. So that’s actually the one that he would recommend for you as well.

However, what he’s seen working as well, is the combination with a non-related interests / behaviors. So you add an extra layer which isn’t related to your interests in the first layer.

First of all you need to have a layer with all the interests that you want to target. Then as a second layer add a completely unrelated interest or behavior.

For example, you can target everyone who’s interested in the selected interests (layer 1), but only those who have an iPhone.

iPhone is not related to the other interests in the first layer, but now you can basically dial into a certain part of your actual interests.

Those are the two main ways Wilco has seen working. But… the first method is definitely the one that he recommends. FYI, it’s been working incredibly well for me as well 🙂

How Many Layers Should You Add to Your Facebook Ad Set?

Wilco would never go deeper than two or three max.

Because the more layers you add, the smaller your Facebook target audience gets. Even though your audience becomes way more targeted, he noticed that if it’s too small, it makes it so much harder for Facebook to optimize it.

As mentioned before, with a normal interest-based campaign, Wilco recommends an audience size of at least 500,000.

Try to keep it that high.

That’s still a lot for some niche markets, but that’s just where Facebook has enough people inside of the audience, so they can still optimize and choose who they’re actually going to target.

How Many Interests Should You Add per Layer?

That’s Wilco’s personal sweet. He would personally never have more than 3 layers, because it will be too much clutter in his opinion. And… It’s not something he’s split tested (more than 3 layers and 30-80 interests per layer).

The above numbers are tested and have been working incredibly well. This way he could always reach a fairly decent audience.

If he chooses 30 interests, then he only uses two layers.

He shares what’s been working for him, so you can apply it, by doing the exact same thing on your end, instead of having to figure it all out yourself!

You can use this way of audience targeting to show your ads to very interested and passionate people in your niche market!

Are you, after reading this article, interested in Wilco’s Revolutionary FB™ Interest Targeting Tool? Find out more here...

To your online Success!!